A new resolution on the UN Day adopted in New York!

by Irish End Poverty Day Committee on April 14, 2017 in Ireland

A new resolution on the UN End Poverty Day has been adopted by the United Nations General Assembly on the 21 December 2016 in the frame of the Second United Nations Decade for the Eradication of Poverty (2008 – 2017). 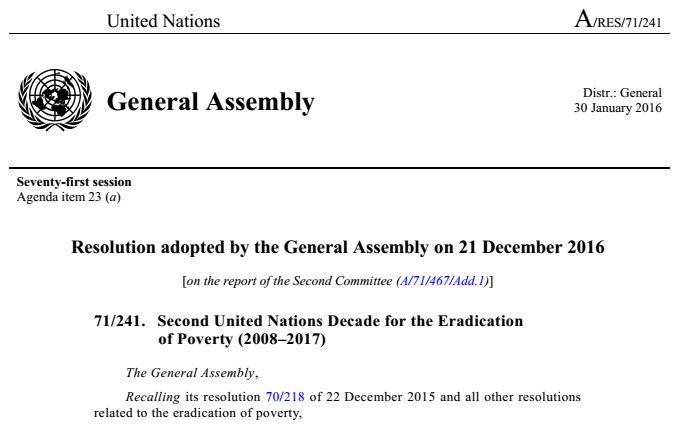 This “United Nations A/RES/71/241 General Assembly” resolution “invites all States, organizations of the United Nations system, intergovernmental organizations concerned and interested national organizations, including nongovernmental organizations, to
consider organizing activities for the celebration in 2017 of the twenty fifth anniversary of the declaration by the General Assembly, in its resolution 47/196 of 22 December 1992, of 17 October as the International Day for the Eradication of Poverty, in order to raise public awareness to promote the eradication of poverty and extreme poverty in all countries,

and in this regard recognizes the useful role that the observance of the Day continues to play in raising public awareness and mobilizing all stakeholders in the fight against poverty and promoting the active participation of those living in extreme poverty in the design and implementation of programmes and policies which affect them, with the aim of achieving the 2030 Agenda for Sustainable Development.”

← When Voices Unite: Breaking the Silence to Leave No One Behind
Let’s Answer Again the 1987 Call to Action! The 2017 International Concept Note for UN End Poverty Day →