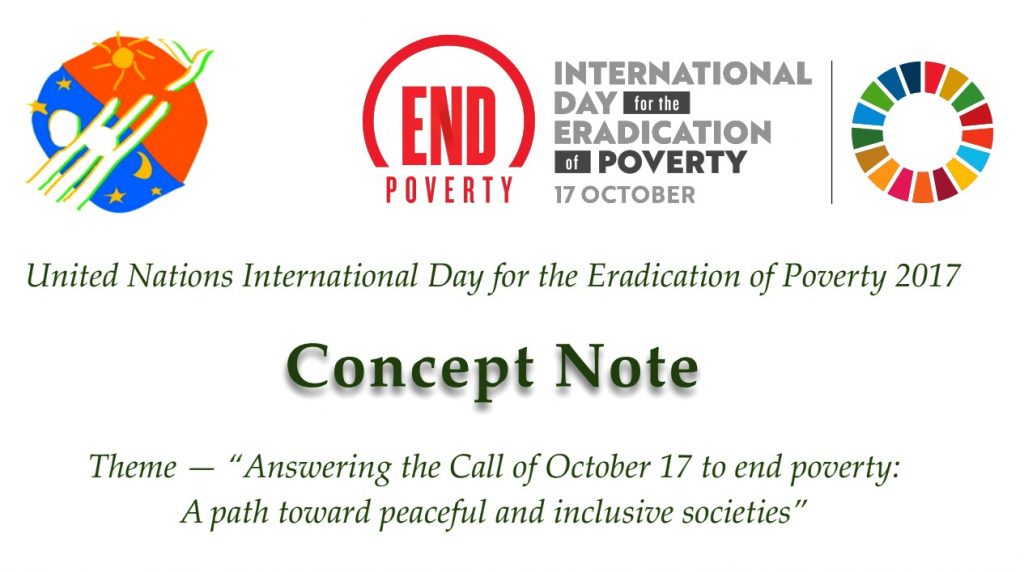 The views in this document do not necessarily represent those of the United Nations or its Member States.

This year marks the 25 th anniversary of the declaration by the General Assembly, in its resolution 47/196 of 22 December 1992, of 17 October as the International Day for the Eradication of Poverty.

This year also marks the 30 th anniversary of the Call to Action by Father Joseph Wresinski—which inspired the observance of October 17 as the World Day for Overcoming Extreme Poverty—and the recognition by the United Nations of the day as the International Day for the Eradication of Poverty.

The Call to Action of October 17 that was launched thirty years ago is recorded in the text on the Commemorative Stone at the Trocadero Human Rights Plaza in Paris which was unveiled in the presence of 100,000 people:

“On the 17th of October 1987, defenders of human and civil rights from every continent gathered on this plaza.
They paid homage to the victims of hunger, ignorance and violence. They affirmed their conviction that human misery is not inevitable.
They pledged their solidarity with all people who, throughout the world, strive to eradicate extreme poverty.

Wherever men and women are condemned to live in extreme poverty, human rights are violated.
To come together to ensure that these rights be respected is our solemn duty.”

A replica of the commemorative stone containing this text is installed in the North Lawn of the United Nations headquarters in New York.

The Call to Action which was taken up and replicated in many countries has allowed people living in extreme poverty to break the silence of poverty and to act in solidarity with those who aspire to be their partners.

The theme for this year’s commemoration (“Answering the Call of October 17 to end poverty: A path toward peaceful and inclusive societies”) reminds us of the importance of the values of dignity, solidarity and voice underscored in the Call to Action to fight to end poverty everywhere.
These values are also evident in the United Nations’ Agenda 2030 for Sustainable Development which sets poverty eradication as the overarching objective and obligated all countries to end poverty in all forms, through strategies that guarantee the fulfillment of all human rights and ensure no one is left behind. The importance of public awareness, voice and the active participation of people living in extreme poverty is recognized both in the Agenda itself and in the process of consultations led by the United Nations that ensured the concerns and priorities of millions of people, especially those living in extreme poverty, were included and heard. The active participation of those living in extreme poverty will be critical to the success of the Sustainable  Development Goals.

The achievement of a world free from poverty provides a path towards the achievement of peaceful and inclusive societies as envisioned in Goal 16 of the Sustainable Development Goals. One of the key targets of the Goal 16 is to ensure responsive, inclusive, participatory and representative decision-making at all levels. Goal 16 therefore underscores a key element of the Call to Action of October 17, which is to encourage people living in extreme poverty to break the silence of poverty and to act in solidarity with those who aspire to be their partners in the fight against poverty.

Therefore, in this auspicious year, it is important for us to renew our commitment to answer the Call to Action that was launched on October 17, 1987. To achieve this goal, the International Committee for October 17 and the International Movement ATD Fourth World have jointly launched a global campaign—“Stop Poverty: All Together in Dignity”— which invites people everywhere to make a personal pledge to join the Call to Action in 2017.

The global campaign also invites individuals, communities, organizations and countries to prepare for and celebrate October 17 in 2017 in many rich and diverse ways, including discovering or sharing stories that show how poverty can be overcome when people join together in efforts to uphold the rights of all; organizing or participating in cultural events to celebrate the courage and the daily fight of the poorest; and engaging in meaningful dialogue about how to build a society that leaves no one behind.

The General Assembly of the United Nations in its  resolution A/RES/71/241 in 2016 invited “all States, organizations of the United Nations system, intergovernmental organizations concerned and interested national organizations, including non-governmental organizations, to consider organizing
activities for the celebration in 2017 of the twenty-fifth anniversary of the declaration by the General Assembly, in its resolution 47/196 of 22 December 1992, of 17 October as the International Day for the Eradication of Poverty, in order to raise public awareness to promote the eradication of poverty and extreme poverty in all countries.”

More information about these initiatives, events, activities and commemorations organized in New York and worldwide to mark this special observance of October 17 can be viewed at:
(a) the UNDESA website;
(b) the Stop-Poverty global campaign website;
(c) the OvercomingPoverty website;
(d) and for Ireland on www.17october.ie.

On the 17th of October each year, we come together to demonstrate the strong bonds of solidarity between people living in poverty and people from all walks of life, and our commitment to work together to overcome extreme poverty and abuse of human rights through our individual and shared commitments and action. An important commitment is to honour the human dignity of people living in poverty and to fight to end the discrimination, humiliation and social exclusion they suffer.

The International Day for the Eradication of Poverty and its antecedent, the World Day for Overcoming Extreme Poverty, are intended to promote dialogue and understanding between people living in poverty and their communities, and society at large. “It represents an opportunity to acknowledge the efforts and struggles of people living in poverty, a chance for them to make their concerns heard and a moment to recognize that poor people are in the forefront in the fight against poverty.” (United Nations, Report of the Secretary General, A/61/308, para. 58)

← A new resolution on the UN Day adopted in New York!
A Message of Peace – ‘Playing for Change’ prepares a video for next UN End Poverty Day! →