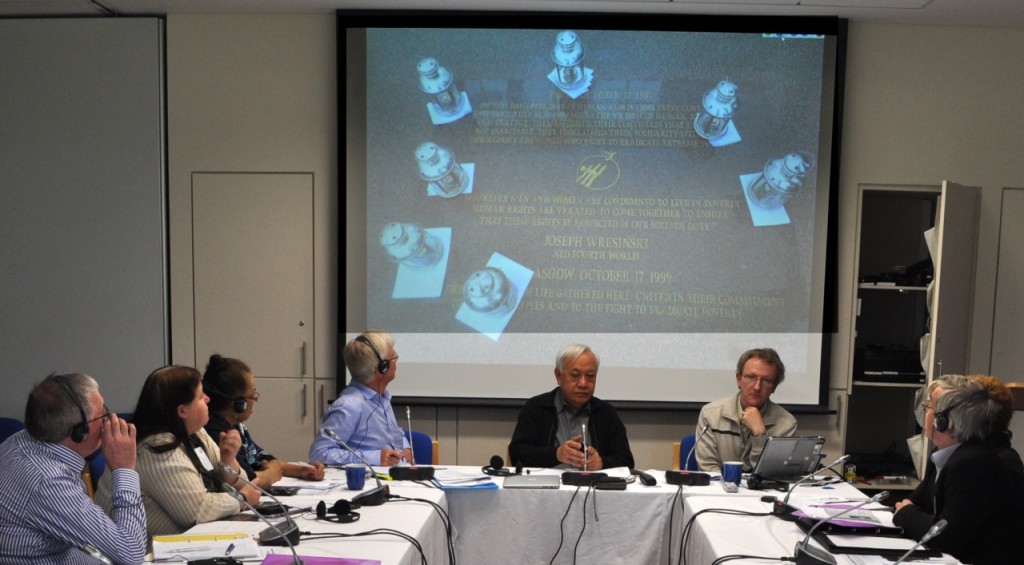 The agenda of work of the International Committee for October 17 was busy. Guests from UK and Ireland contributed by presenting the orbservance in Dublin, London and Glasgow. Here are a few words about Glasgow!

A Commemorative Stone, carved in granite and similar to the one in Paris, was unveiled in George Square on the 17 October 1999. In George Square, on 17 October,  you will find music, drama, dancing and as always at the heart of the day, people living in poverty standing up and telling their stories. friends and supporters of ATD Fourth World UK, Bridging the Gap and the Poverty Truth Commission come together to organise the day. Both Bridging the Gap and the Poverty Truth Commission supported  Poverty Alliance – Scotland to  organise a Challenge Poverty Week from the 14-19 October where several events took place to help raise awareness of poverty in Scotland.

On 17 October 2013 celebration in Glasgow the event was called ‘Speaking aloud in the centre of the city stories and experiences too often kept hidden around the edges’.  People gathered around the commemorative stone and read out testimonies with emphasis on being strivers and not skivers:

“Today is the International Day for the Eradication of Poverty. In one sense, I am delighted to welcome you here today, people committed to standing shoulder to shoulder with people experiencing poverty to campaign for its end. In another sense it is upsetting that in 2013, people are enduring poverty at all. Today is about bearing witness to their struggle.

As you know, we have a stone in George Square, similar to the one laid in Paris, to symbolise their struggle and importantly, to make a clear statement that Glasgow is working hard to lift people out of poverty.

Poverty is not just about money and benefits, although they are important. Poverty is also about poverty of spirit, poverty of ambition, and poverty of imagination. That is poverty using its widest definition.
For they are all linked, and feed off each other and can lead an individual to despair.
The impact of constant scrimping and the stress it places on families is something we all need to consider especially in these difficult times called austerity.

The well being of all our citizens is something all of us gathered here today have a stake in.
In conclusion, I trust we all have the humility, compassion and wisdom to shape policy, to make a difference to people living in poverty.”

Later in the day, the International Committee met with  Joan Burton TD, Minister of Social Protection. This meeting took place at the Irish Parliament, the Dial and was organised with the support of the Social Inclusion Division of the Department of Social Affairs.

Joan Burton TD said she was ready to ask the Irish representation at the United Nations to involve itself actively in the promotion and observance of the Day in New York and internationally. 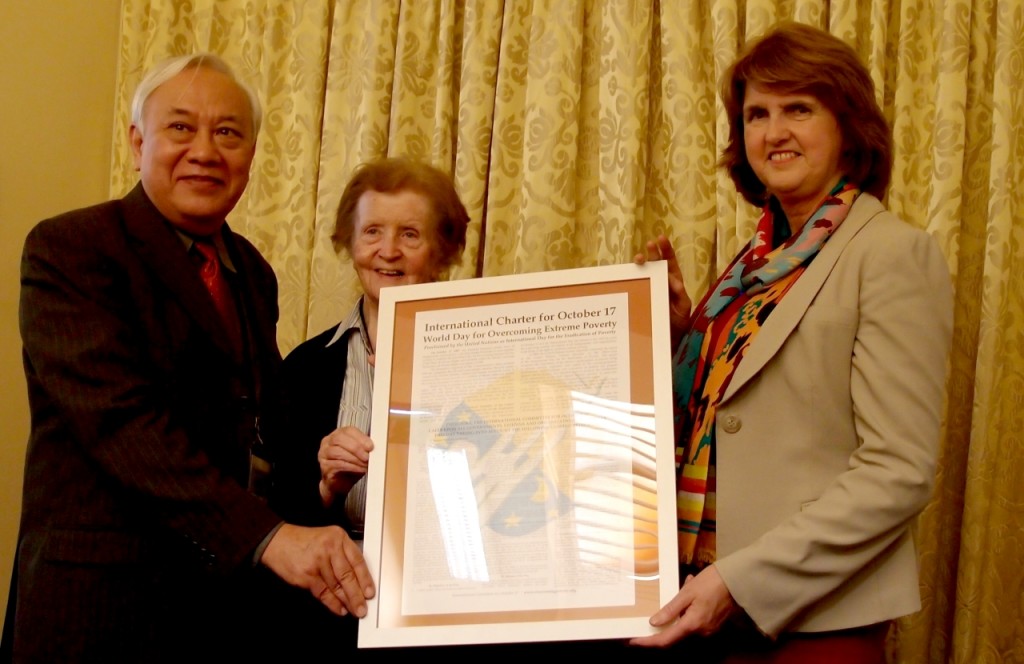