Moving from humiliation and exclusion to participation: Ending poverty in all its forms

In 2017, we will be celebrating the 30th anniversary of Joseph Wresinski‘s call to action launched on 17 October 1987 and we’ve already started preparing for an extraordinary campaign which we would like to invite you to join in.

Since 17 October was recognized as International Day for the Eradication of Poverty, by the United Nations in 1992, considerable progress has been made. The “UN Guiding Principles on Extreme Poverty and Human Rights”, adopted in September 2012, affirm that extreme poverty is not merely a matter of a lack of income, it is also a question of human rights.

Following on from the Millennium Development Goals, Mr. Ban Ki-moon, UN Secretary General, declared on 17 October, 2015: “[…]the world embarks on a bold new path towards a future of dignity for all guided by the 2030 Agenda for Sustainable Development” .

This year, the theme adopted by the UN for the 30th gathering since 17 October 1987 is directly aligned with this agenda:

Moving from humiliation and exclusion to participation:

Ending poverty in all its forms.

It echoes the words of Joseph Wresinski who, on 17 October 1987, entrusted us with a great responsibility: to reach out to the poorest as our brothers and sisters and ensure they are our primary partners in everything we do.

In the ” Letter to Friends Around the World“, pepared by the Forum on Overcoming Extreme Poverty, you will find extracts of the 2006 Report from the UN Secretary General on the impact of the International Day as well as testimonies from last year’s 17 October events. We hope that this letter will help you promote and celebrate the UN Day wherever you are.

The Forum on Overcoming Extreme Poverty pepared a poster for the day you can download here. 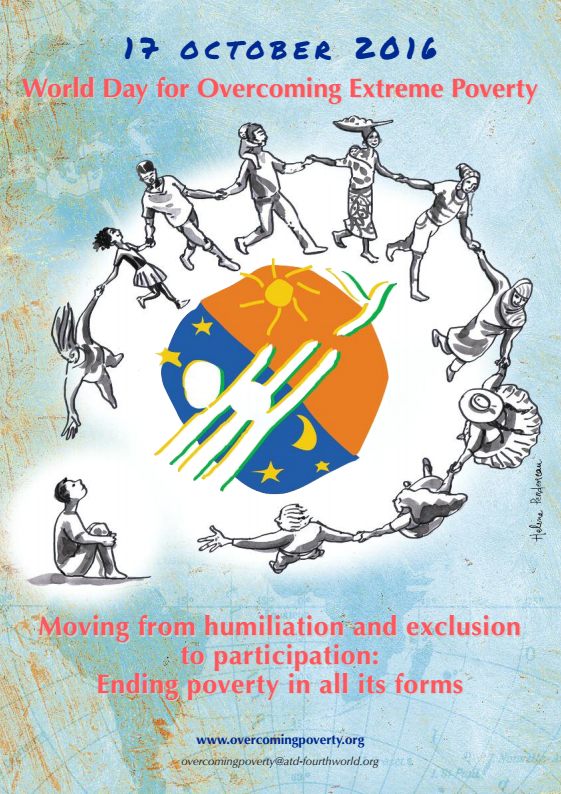