The 2018 theme of the UN End Poverty Day

The United Nations, in dialogue with the International Committee for the UN End Poverty Day, agreed on the 2018 theme of the UN Day:

From January 2018 to April 2018, a brainstorming was held in New York followed by an on-line consultation to develop proposals for the theme for October 17, 2018. The informal working group in New York agreed initially to propose the following themes for consideration and further consultation:

1. Ensuring that human rights are a reality for all: overcoming together the challenges of reaching those furthest behind.

2. Coming together with those furthest behind to build a world of universal respect for human rights and dignity.

These two proposals reflected the fact that 2018 will mark the 70th anniversary of the Universal Declaration of Human Rights (UDHR) which will be observed at the UN and around the world. In keeping with the defense of human rights at the core of the October 17 observance it is important for the 2018 IDEP theme to reinforce and highlight the relationship between the Day and the Universal Declaration of Human Rights.

The 2018 official theme stresses the criticality of ensuring that no one is left behind in all efforts to end poverty and to defend the human rights and dignity of people living in poverty. Therefore, the proposed theme stress the need to reach and include those “furthest behind”.

The theme has not included explicitly the issue of refugee and migrants but it is the intention that these concerns will be discussed in the concept note that will accompany the selected theme and be published before the end of July 2018.

In Dublin, the day will also mark by the 10th anniversary of the unveiling of the 17 October Human Rights and Poverty Stone (unveiled on 17 October 2008). 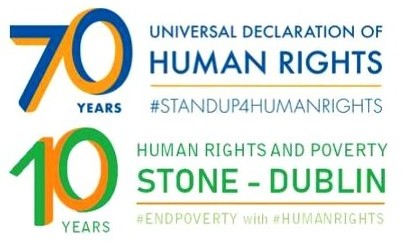 ← There is nothing new about poverty. What is new, however, is that we have the resources to get rid of it!
The International Committee for October 17 meets again in Rome in May 2018! →